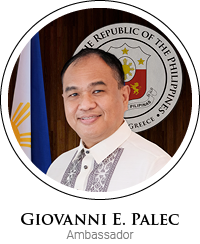 The Philippine Embassy was officially opened in October 1988 by CDA a.i. ANTONIO P. VILLAMAYOR. Thereafter, Ambassador ALBERTO A. ENCOMIENDA arrived in Greece as the first Philippine Ambassador Extraordinary and Plenipotentiary accredited by the Greek government on 29 March 1989 and followed by the following ambassadors: